Roller Derby 101
This is a site for derby nerds who want to read more about derby all the time
I, Buffy Smothers, have been skating for a few years and thought to myself how can I spend even more time in my life doing derby when I can't actually get to more sessions... make a derby website.

I have written this based on my personal derby experiences as a skater, referee in training and coach. Combined with what I've read and from other people I have contact with in the derby community. 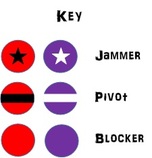 Flat track derby consists of a game on an oval flat track. Skaters move around the track in two groups which comprise of a 'pack', there is a maximum of 4 people from each team making up a pack. This will consist of 3 blockers, and one pivot (another blocker who has a striped helmet cover). There is one other player from each team on track in one jam, they wear a star on their helmet and are called the jammer, these are the players that score the points. The points are scored by lapping the other teams pack and jammer. 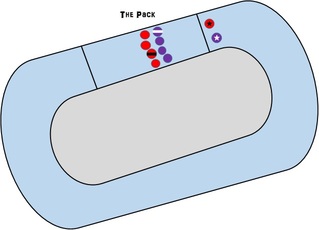 The game consists of two halves (or periods) which in turn are made up of two minute jams. The jam starts with the jammers behind a line, which the packs are infront of, on the whistle the skaters go. On the jammers first time through the pack they do not score, but they do have the chance to become lead jammer. They become lead jammer if they are the first player to pass all the opposing skaters in-bounds.  If one of the jammers becomes lead jammer they then have control of that jam as lead jammer has the power to end the jam at any point by tapping their hips. If neither jammer gets lead jammer status, or loses it the jam will run for two full minutes.

Contact
In derby there are certain rules about making contact with other skaters, if this is done inappropriately the skater may end up in the sin bin or penalty box as it is more frequently referred to in the UK. Contact is called 'hitting' physically moving someone or 'blocking' more broadly as this can involve positional elements such as getting in someone's way like an obstacle, Skaters can 'hit' each other with their shoulder, hip or both together.

Some illegal moves include:
If illegal things occur, the referees will blow the whistle and send the naughty skater to sit in the penalty box for 30 seconds (assuming they only committed one offence at that point and they are not the second jammer to head to the box).

To find a derby league near you check out the derby roster.
Powered by