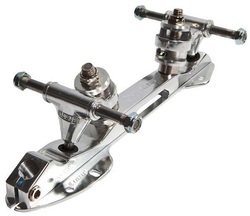 Plates can really change the feel of your whole skates. There are many small nuances to consider such as:

I think generally people suggest it boils down to smaller angle = more stability and speed whereas a bigger angle = easier and more responsive turning. There are people who swear by one type but it's basically personal preference. I'd advise trying both, see what you like and how it matches your skating style. I personally skate on a DA45 degree Suregrip magnesium Avenger plate, which I love because of how light and sensitive to my movement they are. Many people who have a DA45 plate  will prefer harder wheels than with a DA10, because a DA45 plate holds your wheels on the ground more, giving you more grip. Having said that I still skate on poisons mainly, but I only weigh 52kgs which isn't a typical derby girl weight..

Materials and weight
Plates are usually made out of aluminium, nylon or magnesium. Here is a run down of the materials:

Nylon is generally the lightest but it is usually also the weakest and most likely to snap. It bends under weight meaning it is not particularly responsive. This should be avoided for derby usually, particularly by heavier skaters.

Magnesium is lighter than aluminium but stiffer and more expensive. They are not as flexible as the aluminum which means they have been noted to hurt people's feet. Although this is not something I have experienced with my Sure-Grip Avenger magnesium myself.

Angle
One other thing to consider when looking at plates is the kingpin, otherwise referred to as the plate's angle of this. Plates are usually between 10-30 degrees, this usually means the smaller the angle the less turning and agility you will get out of your plate, like juking and turning fast. If you like feeling stable however, smaller angles may be more suitable for you. Although you are not as stable on plates of a higher kingpin degree crossovers, lateral cuts and weaving are much easier. Many people find they take some getting used to as they have a very different feel to smaller angles. There is one plate on the market currently, the Powerdyne Arius, that does not have a king pin, but is thought to move similar to the F16 pilot plate when tightened up fully.

Mount
I'd also suggest when buying plates be sure to consider the size of your plate carefully - I was caught out by reading the Suregrip recommendations for plate size. They recommend sizes next to skate sizes BUT what they don't say is that those sizes are for a short forwards mount rather than a standard one. Like most things in choosing you skate gear this might not be for everyone. Therefore, another thing to consider when purchasing plates is the size you want as this can depend on the type of mount you want.

However, if you like your weight through the middle of your heels (offering more stability) you will want a standard mount. This is where the truck is directly underneath the ball of your heel. The end of the plate should be near the back of the skate with this sort of mount.

When looking at plates you might also want to consider which cushions to buy...
Powered by